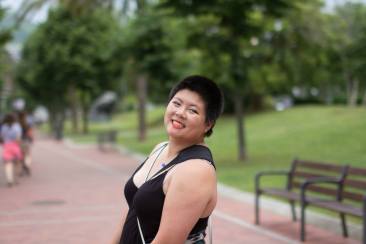 Unfortunately, my future looks like it’s going to be one busy life. I want to become a
doctor, which means many years of school ahead of me, more years of residency, and
finally as a practicing physician, even still I won’t have a lot of vacation time to travel.
I heard from upperclassmen that the best time to go abroad is during your undergrad years. No other point of your life will be as free and you won’t be as young as you should be. With that advice, I hopped on a plane to Santander, Spain this summer on a study abroad program that offered a required Engineering Communications class and also a History of Spain class.

Before leaving, I was really excited! I got to have my own vacation away from the stressful way my family tends to do vacations, and after taking Spanish for 7 years in middle school, high school and a semester of upper-level Spanish in college, I could finally practice my Spanish for real.

However, when I finally sat myself on a plane in Chicago headed to Madrid, I felt a bit of anxiety over even the smallest act of telling the taxi driver in Spanish where to go from the airport. I had never been to Europe before, and I have never been to a country in which I didn’t have a good grasp of the language. Simply put, I was freaking out a bit.

My program was definitely focused on complete immersion. I was assigned a host family, and in my case specifically just a host mom who lived alone, and upon meeting my host mom Eva, I realized that she knew only a few words in English and the task of communicating with her in Spanish was mine and mine alone. At first, I struggled a lot with finding simple words such as trying to tell my host mom that I liked eggs (huevos) and accidentally saying that I liked bones (huesos). But as the program went on, my Spanish improved an incredible amount, and sooner than I thought, I was having conversations about politics, religion and cultural differences with my host mom.

In addition to my little Spanish town, I traveled all around Europe! I went to two Northern Spanish cities named Bilbao and San Sebastián that are known for the unique Basque culture, the tapas, and the beautiful bay.
I went to Paris, where I met up with friends on a separate study abroad program and visited so many iconic places such as the Notre Dame, the Eiffel Tower, the Latin Quarter, the Lafayette Galleries and Republic Square. I went to Amsterdam, where I took a boat tour of the city through its beautiful canals, saw many Van Gogh works, and ate stroopwafel. Finally, I went to London, where I went to the Wireless Music Festival and saw artists like Drake and David Guetta live! The experience reminded me of my own music-obsessed hometown, the beautiful Austin, Texas.

People make out traveling to be this beautiful and adventurous thing, but I quickly learned that it requires a bit of growing up, especially if it was your first time traveling on your own before. I had to make a lot of quick decisions, handle stressful situations that you didn’t plan for, and use better judgement that I never knew I had, but that doesn’t mean the trip wasn’t worth it. I saw cities full of history and beautiful structures that could never be found here in the United States, ate so much life-changing food, and did wild things in new places. I wouldn’t take any of it back in a heartbeat.